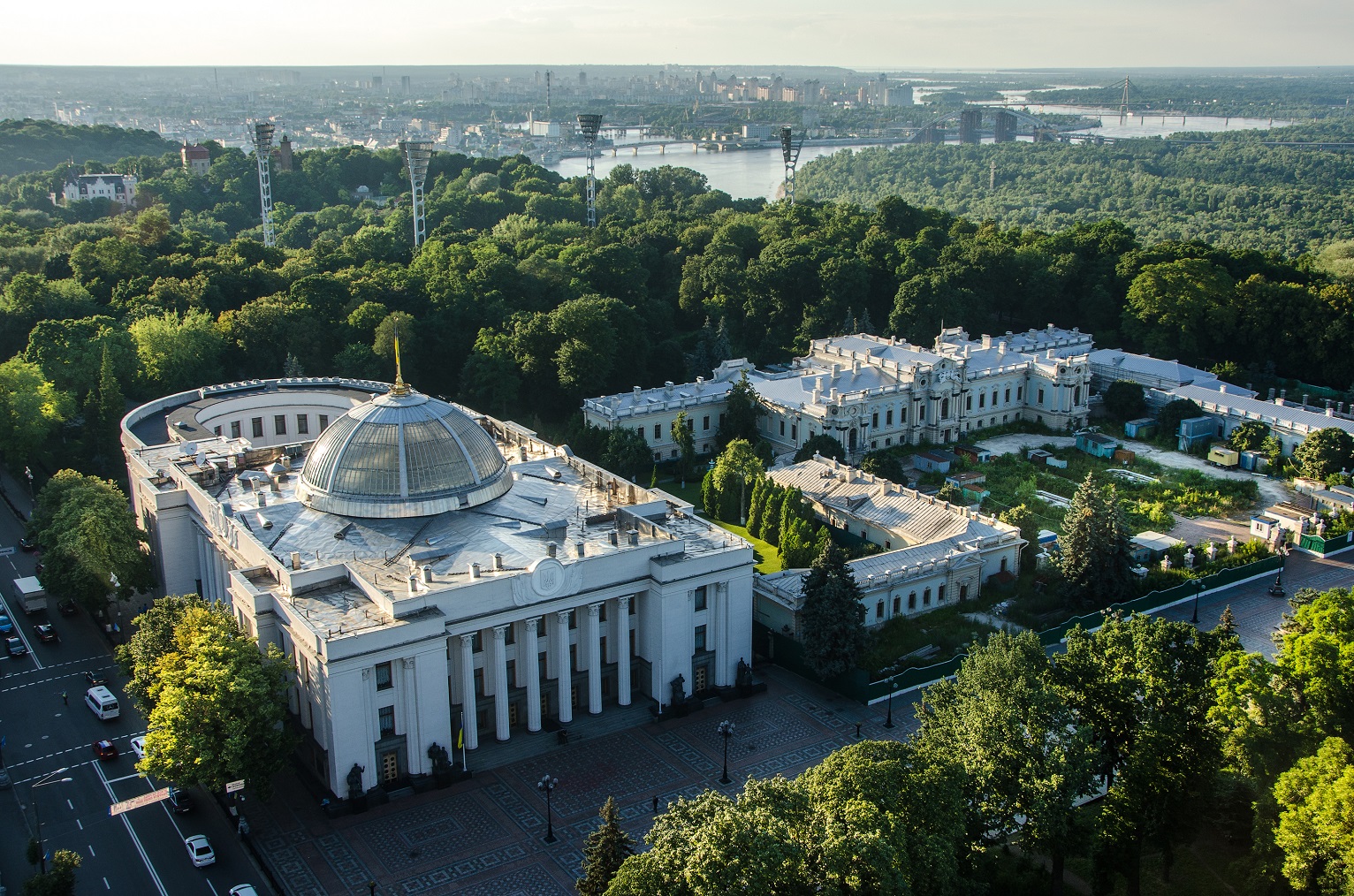 Ukraine is a president / parliamentary republic with the authority divided between The President (Head of the executive power), VerkhovnaRada (Legislative power, Parliament) and court system. Political life is characterized by a great number of political parties. The main law is Constitution adopted in 1997 Borders are with Russia, Belarus, Poland, Slovakia, Romania, Moldova.
The capital is Kyiv (Kiev).
The territorial divisions are 24 regions.
GENERAL INFORMATION

Ukraine  is a country in Eastern Europe. Ukraine borders the Russian Federation to the east and North-East, Belarus to the North-West, Poland,Slovakia and Hungary to the West, Romania and Moldova to the South-West, and the Black Sea andSea of Azov to the South and Southeast, respectively. It has an area of 603,628 km², making it the largest country entirely within Europe.

In 1999–2001, Ukraine served as a non-permanent member of the UN Security Council. Historically, Soviet Ukraine joined the United Nations in 1945 as one of the original members following a Western compromise with the Soviet Union, which had asked for seats for all 15 of its union republics. Ukraine has consistently supported peaceful, negotiated settlements to disputes. It has participated in the quadripartite talks on the conflict in Moldova and promoted a peaceful resolution to conflict in the post-Soviet state of Georgia. Ukraine also has made a substantial contribution to UN peacekeeping operations since 1992.

Ukraine is a unitary state composed of 24 oblasts (provinces), one autonomous republic (Crimea), and two cities with special status: Kiev, its capital and largest city, and Sevastopol, which houses the Russian Black Sea Fleet under a leasing agreement. Ukraine is a republic under a semi-presidential system with separate legislative, executive, and judicial branches. Since the dissolution of the Soviet Union, Ukraine continues to maintain the second-largest military in Europe, after that of Russia. The country is home to 46 million people, 77.8 percent of them are ethnic Ukrainians, with sizable minorities of Russians (17%), Belarusians and Romanians. Ukrainian is the official language of Ukraine. Russian is also widely spoken. The dominant religion in the country is Eastern Orthodox Christianity, which has strongly influenced Ukrainian architecture, literature and music.

Ukraine has a mostly temperate continental climate, although the southern Crimean coast has a humid subtropical climate. Precipitation is disproportionately distributed; it is highest in the west and north and lowest in the east and southeast. Western Ukraine receives around 1,200 millimetres (47.2 inches) of precipitation annually, while Crimea receives around 400 millimetres (15.7 inches). Winters vary from cool along the Black Sea to cold farther inland. The average yearly temperature in Ukraine varies between +5..+7 C in the north and +11..+13 C in the south.
TOURISM

Ukraine occupies 8th place in Europe by the number of tourists visiting, according to the World Tourism Organisation rankings. Ukraine is a destination on the crossroads between central and Eastern Europe, between north and south. It has mountain ranges – the Carpathian Mountains suitable for skiing, hiking, fishing and hunting. The coastline on the Black Sea is a popular summer destination for vacationers. Ukraine has vineyards where they produce native wines, ruins of ancient castles, historical parks, Orthodox and Catholic churches as well as a few mosques and synagogues. Kiev, the country’s capital city has many unique structures such as Saint Sophia Cathedral and broad boulevards. There are other cities well-known to tourists such as the harbour town Odessa and the old city of Lviv in the west. The Crimea, a little “continent” of its own, is a popular vacation destination for tourists for swimming or sun tanning on the Black Sea with its warm climate, rugged mountains, plateaus and ancient ruins. Cities there include: Sevastopol and Yalta – location of the peace conference at the end of World War II. Visitors can also take cruise tours by ship on Dnieper River from Kiev to the Black Sea coastline. Ukrainian cuisine has a long history and offers a wide variety of original dishes. The Seven Wonders of Ukraine are the seven historical and cultural monuments of Ukraine; the sites were chosen by the general public through an internet-based vote.

According to the constitution, the state language of Ukraine is Ukrainian. Russian is widely spoken, especially in Eastern and Southern Ukraine. Ukrainian is mainly spoken in Western and central Ukraine. In Western Ukraine, Ukrainian is also the dominant language in cities (such as Lviv). In central Ukraine, Ukrainian and Russian are both equally used in cities, with Russian being more common in Kiev, while Ukrainian is the dominant language in rural communities. In eastern and southern Ukraine, Russian is primarily used in cities, and Ukrainian is used in rural areas. These details result in a significant difference across different survey results, as even a small restating of a question switches responses of a significant group of people.

Ukraine’s healthcare system is state subsidised and freely available to all Ukrainian citizens and registered residents. However, it is not compulsory to be treated in a state-run hospital as a number of private medical complexes do exist nationwide. The public sector employs most healthcare professionals, with those working for private medical centres typically also retaining their state employment as they are mandated to provide care at public health facilities on a regular basis.

Ukraine produces nearly all types of transportation vehicles and spacecraft. Antonov airplanes and KrAZ trucks are exported to many countries. The majority of Ukrainian exports are marketed to the European Union and CIS. Since independence, Ukraine has maintained its own space agency, the National Space Agency of Ukraine (NSAU). Ukraine became an active participant in scientific space exploration and remote sensing missions. Between 1991 and 2007, Ukraine has launched six self made satellites and 101 launch vehicles, and continue to design spacecraft. The country imports most energy supplies, especially oil and natural gas, and to a large extent depends on Russia as its energy supplier. While 25 percent of the natural gas in Ukraine comes from internal sources, about 35 percent comes from Russia and the remaining 40 percent from Central Asia through transit routes that Russia controls. At the same time, 85 percent of the Russian gas is delivered to Western Europe through Ukraine. Growing sectors of the Ukrainian economy include the information technology (IT) market, which topped all other Central and Eastern European countries in 2007, growing some 40 percent. Ukraine ranks fourth in the world in number of certified IT professionals after the United States, India and Russia.